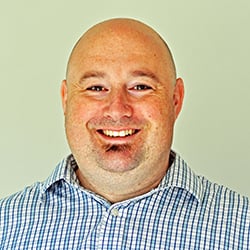 John (age 41, from Kennett Square, Pennsylvania) has been with the company since the beginning of 2015 in project manager and analyst roles. He earns his VP elevation after playing a major role in the creation and deployment of SnapFulfil’s unique Remote Implementation (RI) program, which allows its agile and flexible cloud-based WMS to be onboarded from anywhere in the world, within weeks.

The RI program provides tailored virtual support, including regular online training and status meetings, to ensure new teams are able to access and test the system, meeting go-live deadlines. John’s expertise in data gathering and project scoping has seen him manage the delivery and training of SnapFulfil’s first 3PL client to create and configure its own new stock owners, as well as the first business to undertake majority self-implementation across multiple sites.

He says: “I’m delighted on a personal level of course, but what’s more gratifying for me is the winning and cost effective solution we’ve developed for our clients. Our first remote projects were successfully completed in early 2020, but the pandemic has really accelerated its acceptance and demand. It works so well because SnapFulfil’s sophisticated rules-based engine is extremely configurable.

“RI like this not only overcomes movement restrictions but site labor shortages too. We can handle multiple implementations at any given time, which means a much lower cost to the client. It’s the way to go and once again we are leading the way in highly customizable user experience and convenience.”

Mifsud reports into Implementation Services Executive Vice President, Smitha Raphael, who he has been shadowing for the past year and providing support cover. She explains: “John’s VP promotion is richly deserved. He’s been an outstanding Project Manager and has implemented many complex projects in the US. He’s also engineered some really innovative process improvements that have helped us be successful as a team. We look forward to the further ideas and initiatives that John will no doubt bring to the US Project arm in his new role.”

John, who originally hails from Slough, near London in the UK, has long been an advocate of SnapFulfil, having benefitted from its power and efficiencies while System Support Manager for a leading 3PL provider. They relied on the WMS to maintain a throughput of more than 3,500 pallet moves per week.

But he met his wife-to-be, Dymphna, in 2009 at a cousin’s wedding in Philadelphia and got some first-hand experience of managing DC IT operations remotely as he divided his time between the US and UK for a year, before making the permanent move stateside and continuing the role virtually.